MENU
Efficacy Tests
Back to home page
Zamknij
Operation of individual components *
Bigger Bust contains natural plant ingredients, derived from cereals and other plants. The amount and type of active ingredients in the diet supplement are appropriately chosen so that the effects of all ingredients complement each other, enhancing the effects.

The studies conducted on the main ingredient, hop cones, focus on the biological activity of naturally occurring compounds in hops, including: xanthohumol, α- and β-acids.w and 8-prenylarylene. It has been found that these compounds exhibit a variety of biological, antibacterial, antioxidant, anti-inflammatory or estrogenic activities, ie, inaugurating the development of secondary sexual characteristics, including breast development and regulation of the menstrual cycle. The substances contained in hop cones also have a positive effect on vasomotor symptoms and other menopausal symptoms, which results in a decrease in the concentration of progesterone in the blood.

Bigger Bust next to hop cones contains red clover, buckwheat, corn, soya, rye, wheat, barley and apple fiber. Alternative medicine uses these plant materials because the phytoestrogens contained in them are in some cases able to replace estrogen. Phytoestrogens of plants stimulate the "estrogen receptor" in breast tissue, leading to an increase in their volume. In this way phytoestrogens
They can stimulate natural growth of glandular tissue, resulting in the production of new cells, leading to the strengthening and firming of the breast. In addition, phytoestrogens generally act in opposition to factors that promote the development of vascular diseases, including lowering cholesterol levels and increasing the flexibility of blood vessels. There is a thesis that phytoestrogens can prevent or alleviate the effects of estrogen deficiency disorders in the body including: osteoporosis. They have a positive effect on maintaining bone mineral density. In addition, many research results
The epidemiological evidence shows a causal relationship between the consumption of significant amounts of soy products and the reduction of morbidity for breast cancer. Epidemiological studies indicate that high consumption of soy-based foods and its products in Asian countries, such as China and Japan, also reduces the risk of: breast cancer.

The combination of ingredients was designed to have a positive effect on the general condition of the woman's body. Pentosans contained in barley are a very valuable constituent of dietary fiber. They have the ability to create high viscosity solutions, which favorably affect the metabolism and function of the gastrointestinal tract. These substances are recommended in the prevention and treatment of civilization diseases such as obesity, diabetes, atherosclerosis, heart disease, colorectal cancer.

Age of respondents *
The Bigger Bust product has gained the most recognition among middle-aged women. To a lesser extent, clients are over 50, and about 10% are from 18 to 25 years old.

The main source from which women derive information about Bigger Bust is the website. By contrast, 32% of clients learn about treatments from friends and family.
WWW
Friends / Family
Advertising spot
Length of treatment *

The survey showed that respondents were treated for 4 to 8 weeks. 28% of women used the treatment over 8 weeks, only slightly less, because 24% took capsules for 2 to 4 weeks.
Intensity of treatment *

Over 80% of women claim to take the recommended portion, which is 3 capsules a day. On the other hand, about 14% of women use 2 or 1 capsules a day.
The period after which women perceive changes *

The first subjective effects of change are felt in 41% of the cases after a period of 2 to 4 weeks. 39% of clients noticed changes between 4 and 8 weeks. The action was not felt by 9% of women. On average the first effects a woman expects is 3.8 weeks.
Effectiveness of the preparation in the category "enlargement and firming" *

With respect to the overall performance rating of Bigger Bust, most women indicated 5 on a 6-point scale, where 1 indicated ineffective performance, and 6 indicated the highest efficacy. Ratings below 3 represented only 13% of all listed companies.

The mean overall performance was 4.73.

The improvement of skin elasticity can also be attributed to the positive effects of treatment. 80% of women have seen such changes through the use of the preparation.
The highest efficacy of the preparation was noticed by those who applied the recommended treatment, ie 3 capsules per day.

Clients taking 2 capsules also noticed the results of the treatment, but they were less effective than 3 capsules per day.

The effect of the preparation is visible before 8 weeks in 89% of cases, while in 52% of women, the lesion was noticeable 4 weeks after starting treatment.

The average waiting time for effects is 3.8 weeks. The amount of capsules taken every day translates into the effectiveness of the treatment.

The duration of treatment affects the effects of the preparation. The longer a woman applies the cure, the better she gets.

* Details in the foother of the page.
Back to home page

Find out if the ingredients of Bigger Bust can enlarge the size and firmness of your breasts in a short time and make you  feel more attractive.

The products are also available on manufacturer online store, visit our site: www.medica-group.pl 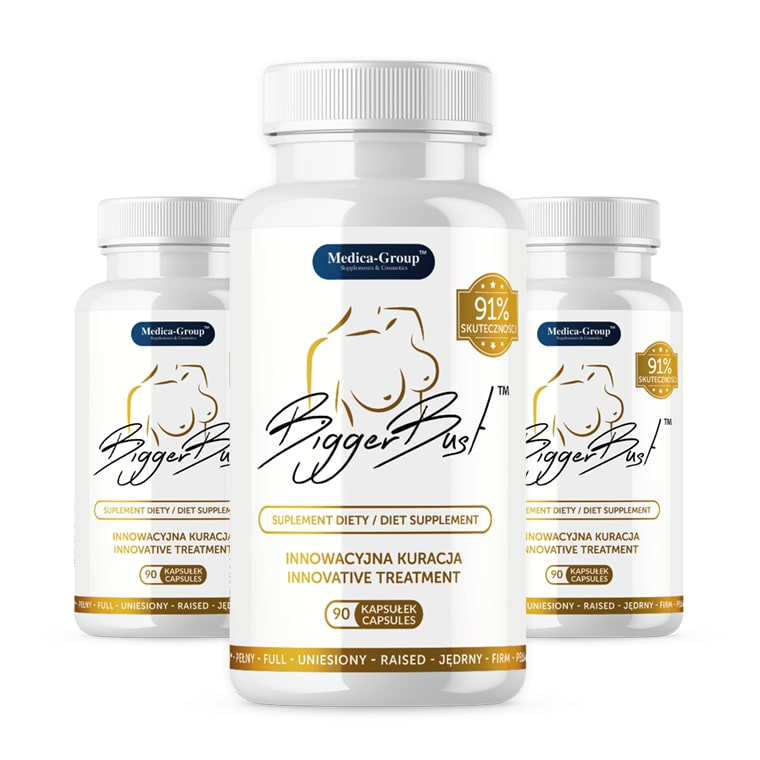 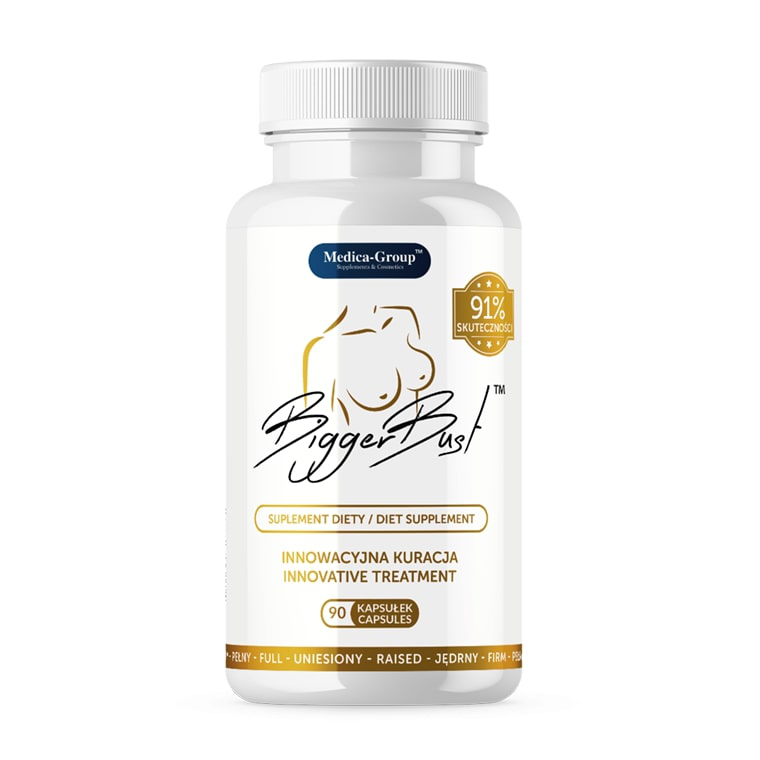 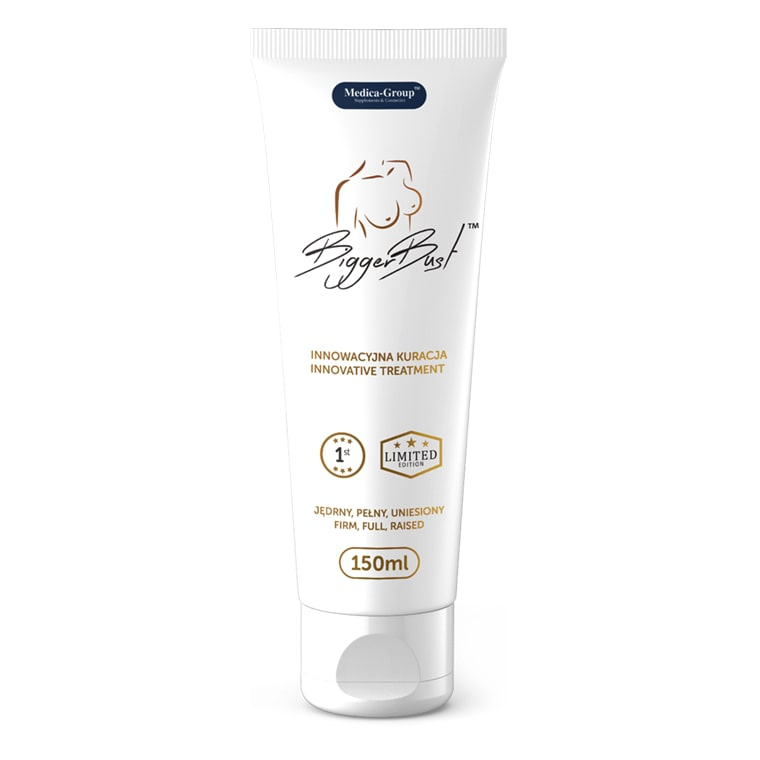 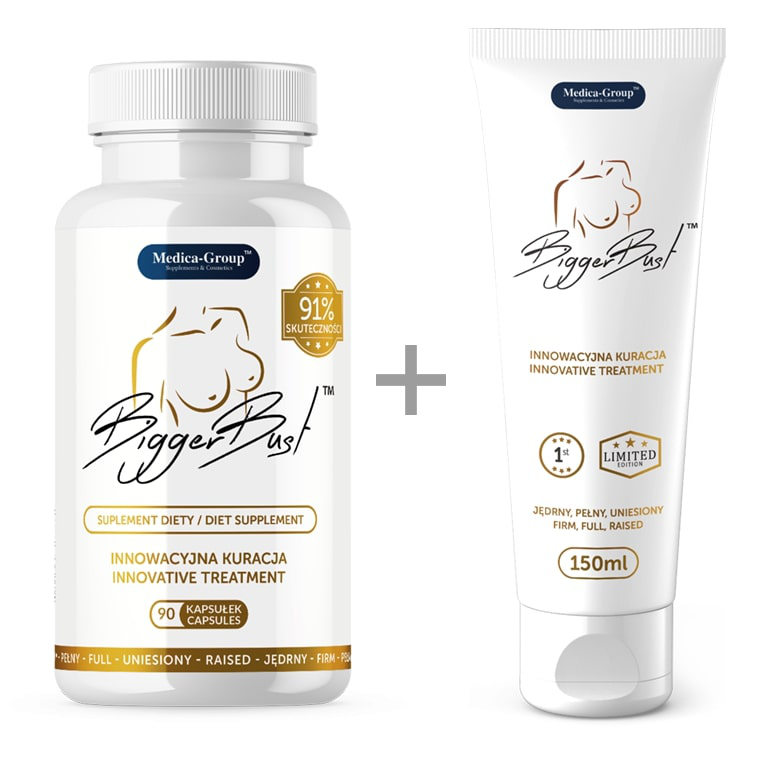 Sprzedaż detaliczna:
Sprzedaż hurtowa:
Paweł Żmuda
Nikola Samp
Content source:
Wikipedia   /   naturalneoczyszczanie.pl   /   biotrendy.pl   /   pl.herbs2000.com   /   czytelniamedyczna.pl
* Efficacy Study Report - na zlecenie "Medica-Group" - May 2017.
1. Healing properties of hops (Humulus Lupulus) M.Mielczarek, J. Kołodziejczyk, B. Olas.
Borgis- Advancement in phytotherapy. , 4/2010, s. 202-210.
2. A. Gryszczyńska, B.Gryszczyńska, B. Opala, Z. Łowicki. using plants in treatment of menopause symptomps. Cz. I. Borgis- Postępy Fititerapii, 4/2010, s.79-92.
3. P.Badowski, B. Urbanek- Karłowska. Phytoestrogens in food. Rozczn. PZH, 2001, 52, NR 3, 203-212.
4. E. Kwiatkowska. Phytoestrogens in food and nutritional properties. Borgis- Postępy Fititerapii, 2/2009, s. 107-212.
5. A. Wirkijowska, Z. Rzedzicki, A. Sobota, E. Sykut-Domańska, P. Zarzycki, K. Bartoszek, E.Kuzawińska. Nutritional properties of oats. Polish Journal of Agronomy. 2016, 25, s. 41–50.
6. Colleen E. Piersen, Phytoestrogens in Botanical Dietary Supplements: Implications for Cancer. Integrative Cancer Therapies 2(2); 2003 pp. 120-138.
*The described products (formulas) are not intended to be substitutes for professional medicine, they cannot cure, treat or prevent diseases. Don’t use if allergic to any of the ingredients of the product (formula). Ingredients, directions for use, properties, precautions, storage and EXP printed on the product (formula). You can return unopened items in new condition, in the original packaging if, according to the package leaflet, the ingredients or properties of the products (formulas) present risk to your health. Notice: The effects of the described products (formulas) may vary individually and affect the body in different ways. The manufacturer does not guarantee that every customer will achieve similar results to those achieved in the Effectiveness Report group. The effects of the described products may vary individually and depend on an individual's condition.
You have up to 100 days to return products without assist causes.
Copyrights © 2021 Medica Group. All rights reserved. Kopiowanie materiałów bez zgody właściciela zabronione.
Realizacja
Close